I have been working on my UFO's and finished this one in February.  It has been machine quilted and bound in the poppy fabric.   No photo yet, must do that soon before it goes to its recipient.  This is a Mystery Quilt hosted by Darelle Castelow in 2001.  I partly cut it out and then put it away as my Mother was ill and I stayed at home to look after her until she passed away.  I came across it in January and found I had not cut it all out and did not have the sewing instructions.  Darelle lives in another suburb of Melbourne and she kindly found the instructions and mailed them to me.  I had used one of the fabric for something else as we sometimes do, but was able to purchase more in a slightly darker dye lot.  I think that has enhanced the quilt rather than take away from it.   Looking at the quilt now a couple of the Snail Trails are not in the right position.   Never noticed this before taking this photo. 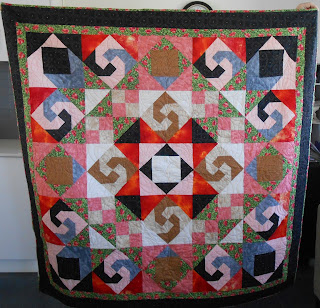 I have also rejoined the Art Quilt group and taken part in my first challenge it was 'Folklore' I used a piece of silk Simon had dyed for me when he was at University a long time ago.  IT is the first time I have cut into it.  A3 size  quilt. 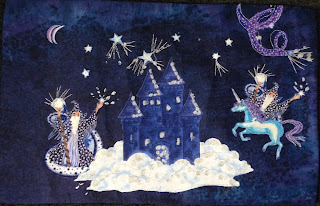 Congratulations on the lovely finish, and your folklore piece. Will you bring the silk piece to the CBD? It would be lovely to see it in person.